“…in the age we live in, a well-displayed villany takes the place of all the finer qualities and the more infamous a man, the more people are disposed to credit him with intellectual force and moral worth.”

“… you get beatings, burnings… They’re a package. And there may be even nastier things in that package. [His] supporters are more than a little seduced by [his] talk of making America great again.”

Octavia Butler. The Parable of the Talents, 1998. 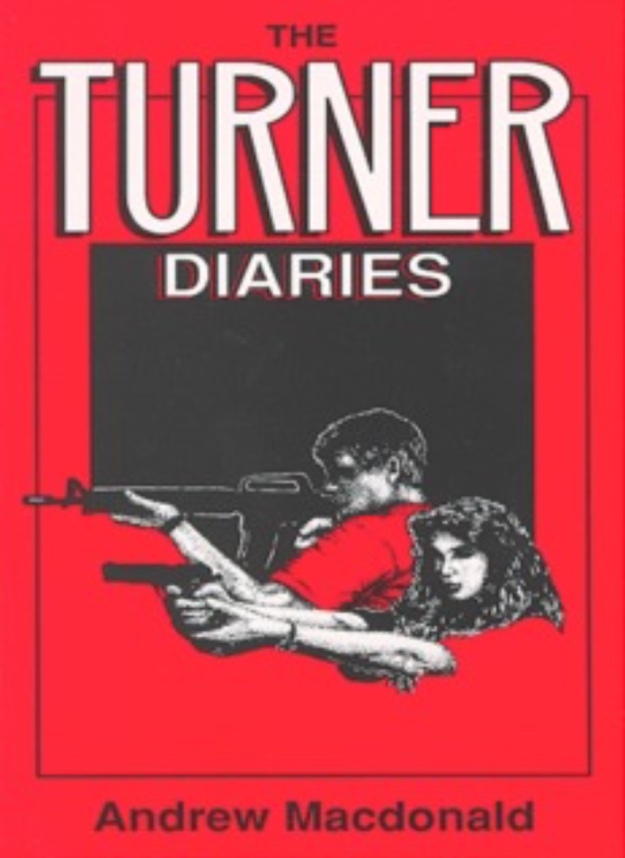 Yet among fictionalized worst case scenarios is one book most students of English literature are likely less familiar with. That is The Turner Diaries, published originally in 1978 by longtime racist activist William Pierce (aka Andrew Macdonald) and essentially a blueprint for the extermination necessary in creating a White Nationalist future. It’s not the only tome on xenophobic reading lists, with Jean Raspail’s The Camp of the Saints, enjoying high profile popularity (1) lately, but The Turner Diaries carries particular weight. This is because it inspired a murderous White power terrorist cell during the early 1980s and is generally connected with the 1995 Oklahoma City federal building bombing. (2)  Not many authors have directed multiple readers toward such sensational militant actions.

While it may seem at present the chance of genocidal warfare is an exaggerated concern, amidst many reasons to oppose Donald Trump, his barely veiled support for White Supremacy tops the list. This began even before the 2016 election and was significant for why conventional wisdom suggested he could never become president. Promoting the bizarrely racist birther attack against Barack Obama was an early indication and it only solidified after Trump showed reluctance to disavow an endorsement from David Duke, the notorious former KKK leader.

In retrospect, this single act (or lack of one) stood out as a stark indicator of the changed world we now live in. Traditionally, most Americans have silently accepted the bureaucratic injustice of prison sentencing disparities and other ways institutional racism occurs, yet in modern times been repelled by overt bigotry, such as represented by the KKK. Still, Trump’s step over that line elicited merely a yawn among supporters and quickly faded, replaced by other scandals.

Trump clearly felt emboldened by the lack of consequence for this and other violations of the norm, like encouraging violence at his rallies, and as his unlikely technical win unfolded, a chilling wave swept across the country. In Portland I first heard about it from local friends of color who recounted strangers making racist comments in public as never before. One local Black woman, who sometimes wears scarves that people mistake for Islamic dress, told me she became fearful taking public transit after multiple people scolded her angrily to “go back home.” Most troubling was another Portland area Black woman beaten with a brick by men who shouted pro-Trump slogans during the assault.

Rising violence against minorities is measurable nationally using crime statistics, even down to specific peaks following Trump’s mass rallies. Tragically, the Right wing body count is only growing. Nine killed by a White supremacist at a Black church in Charleston. Eleven murdered at a Pittsburgh synagogue by an anti-Jewish extremist. Even the New Zealand mosque shooter who massacred fifty Muslims cited Trump as inspiration. When asked by a journalist if growing White Nationalism was concerning, the president answered negatively, passing up another moment to distance himself from this toxic movement.

But no one should have been surprised. After one man murderously rammed his car into a packed crowd of of demonstrators protesting the 2017 Unite the Right Rally in Charlottesville, an event organized by White Nationalists, Trump infamously declared both sides equally at fault. In telling priority, one of his first acts as president was defunding programs aimed at countering domestic terrorism, even one focused specifically on neo-Nazis.

There are many disturbing similarities between Trumpism and Pierce’s fictional ideology inspiring Americans toward race war. For instance, while the pages are full of hatred towards Leftists, traditional Conservatives and Libertarians are also marked for destruction. Just as those same elements within the Republican party found themselves sidelined by Trump’s bloc. Indeed, before 2016, most political observers believed he could never even become nominated because establishment forces opposed him as an extremist. Libertarians still experience difficulty accepting his authoritarian leanings and during the election, Democrats expected a landslide victory because Trump seemed to have as many enemies on the Right as the Left. What they missed, after eight years of a charismatic Black man serving as president, was deep xenophobia still buried throughout American society. Every drop untapped political fuel.

While Republican policies of old at least paid tribute to limited governmental ideals or limits on centralized power, Trump simply doesn’t bother and his supporters remain unfazed… so long as big government aims its big guns at unpopular minorities. He has many times endorsed religious persecution against Muslims— a dramatic abuse of federal power, and enthusiastically supports state involvement in the economy, both by starting trade wars and then borrowing money to bail out businesses damaged by them.

Of course, Trump’s fiery campaign talk about breaking up banks and regulating Wall Street fell by the wayside long ago. Distractions range from his social media feuds to noisy focus on the southern border, where human rights abuses regularly unfold, dulling public outrage to the sight of corralled humans behind barbed wire in overcrowded camps.

Beyond that, Trump openly admires dictatorial leaders around the globe and has several times stated he would disregard unfavorable election results. Attempts to curb his blatant violations of executive power by other political branches have failed. In short, we are are tasting the emergence of New American Fascism:

– a strong government allied with corporate powers toward

furthering the agenda of an unaccountable figurehead at the

While Pierce doesn’t use the term Fascism, it’s very clear his writing aspires toward an idealized version of Germany’s Third Reich. He drops occasional details noting the bravery of SS soldiers, coyly mentions Hitler as “the Great One” (3) and is murderously explicit about how all non-Whites should be wiped out. In the furtherance of this goal, one particular tactic bears current relevance. As The Turner Diaries concludes, Pierce’s race warriors brutally conquer southern California and enact strict segregation policies. They force away all surviving people of color in hopes they will overwhelm national resources, calling this tactic “demographic war.” (4) Anti-Fascists will be “trapped by their own propaganda line, which maintains that each one of these creatures is an ‘equal,’ with ‘human dignity’ and so forth, and must be treated accordingly.” (5)

This is essentially the same idea Trump has advocated by suggesting asylum seekers be diverted into so-called “sanctuary cities.” It’s unclear how this could be accomplished logistically, yet resonates among those who view non-White immigrants as ravening hordes of rapists, instead of simply workers and families seeking a better life. Just as Pierce hoped ‘demographic warfare’ would turn Whites against people of color, this proposal invites discord among urban dwellers, many who oppose iron fisted immigration policies, yet also don’t expect small numbers of localities to reasonably absorb so many newcomers alone.

It’s easy noting connections between The Turner Diaries and rising bigotry today, but much examination still gets important aspects wrong. For instance, a recent NPR segment declared the book is about “Jews and black people who disarm white Americans, take away their guns so that they can’t resist the government.” That’s actually the opposite of what happens. Pierce’s narrative describes how federal anti-gun legislation becomes enacted with the intention of disarming all civilians, but his White protagonists are the only ones who don’t comply. This makes it easy for them to eventually slaughter the ‘Jews and black people’ who trustingly followed the law.

At one point he writes: “…whenever we ran into Blacks near a filling station, we simply opened fire on them . . . It’s a damned good thing they have no firearms or we’d be in a hell of a jam now.” (6) Then later: “…good thing the civilian population was disarmed . . . years ago. If more Blacks had guns there’d be no way we could deal with them…” (7)

NPR bungles such basic elements just as most Democrats and Liberals continue misunderstanding the gravity of our current situation and confuse Trump with some rough incarnation of business-as-usual Conservatism. Fascism is a very different animal. It satisfies an increasingly violent thirst for change among Americans who feel shut out as the middle class disintegrates and mainstream parties falter at offering real solutions.

Fascism can’t be successfully confronted by following traditional rule books, as should be obvious to those frustrated by the lack of legal consequences for Trump’s contemptible acts. This isn’t the old days where a president like Nixon could be brought down by intrepid reporters discovering some hidden crime that shocked the nation. Trump’s criminality take place in the open and crowds cheer him for it. Just as Fascism represents nontraditional alignments of Right wing power, robust and flexible Leftist politics are required to defeat it.

The Turner Diaries envisions a scenario where relatively small numbers of Fascists defeated enemies who lacked such flexibility. Trump’s administration grinds onward despite widespread unpopularity for the same reason. Timid response from the Democratic party are ineffective, only emboldening  Right wing reaction. Everyone who struggles against the New American Fascism must keep all options on the table and remain armed because White Nationalism goes hand in glove with genocide. The dangers have never been so real within most of our lifetimes. 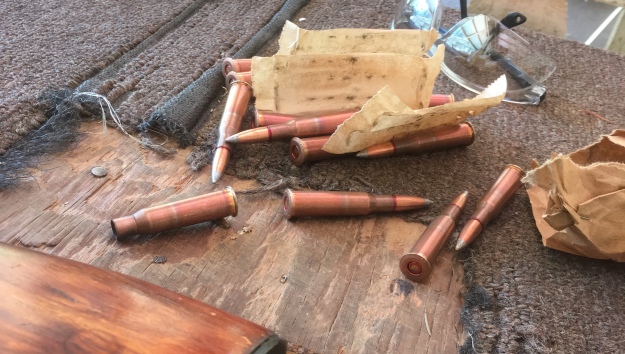 Note: I will be commercial fishing in the Gulf of Alaska for most of the summer and unlikely to post again for a while. Thanks to everyone who reads along and joins in!

2 Timothy McVeigh read the book and even sold copies to others. His bombing attack bears similarities to an event described in the text but McVeigh never linked his personal anti-government sentiments with racist politics. A review of The Turner Diaries on one prominent White Nationalist website admits he was a “non-racialist” and the Leftist journal Race Traitor declared McVeigh “did not appear to be a white supremacist . . . He did not bomb a black church. He did not plant a white bomb.” John Garvey. “The Life and Death of Timothy McVeigh.” Race Traitor, Fall 2001. 7.