There’s been a popular meme running around the internet lately, of Martin Luther King, Jr with the caption “Gun Owner on an FBI watch list.” It’s not surprising, given the current political climate, where liberals and Democrats who formerly opposed the sheer incompetence, racial profiling and lack of transparency endemic to “No Fly Lists,” suddenly embrace these relics of George Bush and Dick Cheny as an opportunity to deny the 2nd Amendment rights of Americans being surveilled by the FBI.

King, was of course, a record holder for one of the most massive FBI files ever compiled. It seems a good time to remind people who else lived under suspicion by the government for decades.

What a week for gun politics. During the several days since an individual claiming allegiance to DAESH, aka IS, murdered forty-nine club goers in an Orlando gay bar, you can hardly ingest any media without some mention. Politicians who never hesitated before approving the misguided Iraq invasion, suddenly discovered in gun control an issue worth filibustering over. Conscious people who previously worried about excesses of government profiling, abruptly called for constitutional rights of citizens to be violated simply over suspicions.

Terrorism, Gay Rights Toxic Masculinity and Gun Control. A more perfect confluence of polarizing issues could hardly be imagined. These are all subjects I possess many opinions on, but we have plenty of time later.

For the moment, I simply became astonished last Thursday while driving my truck around Portland and listening to NPR. My company had a lot of non-profit housing disasters that afternoon so I don’t remember exactly which show it was, but two news commentators were discussing a potential cultural shift in the wake of Orlando and they mused about whether America was ready for a tipping point, such as with cigarettes or climate change.

In other words, years ago when a story aired on these topics, most reputable news outlets felt compelled to include a countering statement from tobacco industry reps or climate change deniers. Was it yet time when journalists could finally present stories about firearms and not bother with even a pretense of objectivity? This is worrying, since already so much of the media picture regarding gun politics is painfully inaccurate. I could write a whole book on the skewed statements, twisted logic and flat out lies broadcast just by NPR in the last several days. That’s the important difference:

Cigarettes are tremendously harmful and most people saying otherwise work for tobacco corporations.

The polar icecaps are melting and most people saying otherwise work for carbon producing industries.

By contrast, gun politics are complicated and most people saying so aren’t employed by arms manufacturers.

There are tremendously articulate individuals from all backgrounds with perfectly legitimate justifications for owning firearms, including semi-auto rifles like the kind used in Orlando. Of course, ordinarily such voices are simply ignored by the media, in favor of tone deaf declarations from the NRA or similar right wing sources. Even so, it was incredible hearing commentators openly express hope that they could push a particular agenda and shut out the other side on such a significant social issue. There is so much to be learned from sharing information, it’s a sad day when even listening to another perspective become unacceptable. 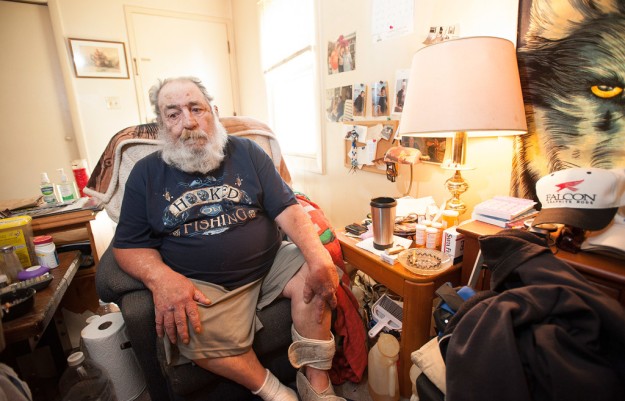 Rockland, Maine–09-01-2015– Harvey Lembo sits in his arm chair in his living room in Rockland next to his wheel chair on Tuesday. Lembo allegedly shot Christopher Wildhaber after he broken in and told Lembo he was there to rob him. Kevin Bennett Photo

As someone who works for a non-profit housing co-operative, the case of Harvey Lembo carried particular interest to me. It started back in September of 2015, when this elderly Maine retiree bought an old Russian revolver for self defense after being burglarized several times. Wheelchair bound and living on a fixed income in subsidized housing, he drew it on the next person who broke in, less than a day later. Lembo made the man sit down at gunpoint, while dialing 9-1-1, and ordered him not to move. However, the intruder jumped up and received a bullet in the shoulder before running away. Officers arrested him shortly.

This might seem a straightforward self defense situation, except Lembo’s property management company doesn’t allow residents to keep firearms. They issued a warning and he agreed to comply, plus the police confiscated his handgun for evidence anyway. This story struck a special nerve with me because of an incident that took place at my job a few years ago. The non-profit housing industry often provides a difficult work environment because many residents come from backgrounds of addiction, mental health crisis and homelessness. That’s exactly why the services we offer are so important and I take pride every day helping provide shelter for people who might otherwise be in hazardous situations. Still, some individuals among these populations are potentially dangerous.

On the day in question, an apartment manager was alone in her office when a male resident burst inside. He beat her almost unconscious with a blunt object and then ran out onto the city sidewalk, threatening passers by. Before he could attack anyone else, the manager regained her senses, grabbed a can of Mace, and doused the man, rendering him harmless until police arrived.

The reward for this brave act? She kept her job, although company policy was immediately changed to prevent managers from possessing any self defense items, from pepper spray to tasers. As a token nod to the danger many employees felt this situation exposed in their places of work, upper management promised to equip building offices with panic buttons, though even years later, this has only been sporadically implemented.

My own company, through contemptible fear of liability, responded to a legitimate self defense act by creating a further unsafe environment for everyone. However, the Maine Legislature recently passed a law that prevents landlords, who accept public money subsidies, from restricting tenants against owning firearms. That’s good news for anyone who supports self defense rights, but the Lembo story requires more scrutiny.

One of the most basic things taught in classes for gun owners is understanding when lethal force can be acceptable. For instance, a person waving their knife right under someones nose presents an immediate life danger. The same person from across a street does not. Likewise, a wheelchair bound elder citizen like Lembo is under much more  threat from intruders than able bodied persons, given his limited mobility.

Some have suggested that Lembo should face charges for shooting the man who broke into his home. This is because Maine law states that a person who uses lethal force against a home invader must first verbally warn them and give an option to leave. The main point is that a resident must be in clear danger before killing the intruder. In an interview, Lembo was recorded saying he shot the man when he got up to leave, also mentioning he intended to only hit him in the shoulder. These statements have been seized upon as proof that the intruder was simply trying to exit the premises when Lembo fired, and also that he must have known the man wasn’t a real threat, because why else shoot to wound? The real facts remain shrouded, but some things can be reasonably determined.

Subsidized apartments for low income people are rarely roomy accommodations. When Lembo drew down on the intruder and ordered him to sit, they were likely in close proximity. Who knows what his real intentions were upon jumping back up, but recounting it later, Lembo generously states it was to leave, because that’s exactly what the man did after being shot. In a small apartment under stressful conditions, there was probably no time for the disabled resident to make any such judgment. Had he hesitated, the intruder might have disarmed him and brought the story to an even more tragic end.

Also, Lembo is likely exaggerating his own marksmanship. In the heat of the moment, while firing an unfamiliar antique revolver at a moving target, the ability to make accurate shot placement, even at close range, is dubious. Looking back on the situation, Lembo feels glad the man survived, simply because no one wants a death on their hands, no matter how potentially justified by the state of Maine. Retroactively giving himself agency for the act is a perfectly natural thing to see expressed, especially by an elderly man subsequently barraged by cameras and media attention.

The Maine decision allowing residents in public housing to keep their gun rights is heartening in a time when many institutions fear liability to a point they will accept seeing people terribly victimized over allowing even non-lethal self defense options. We can only hope that movement spreads.