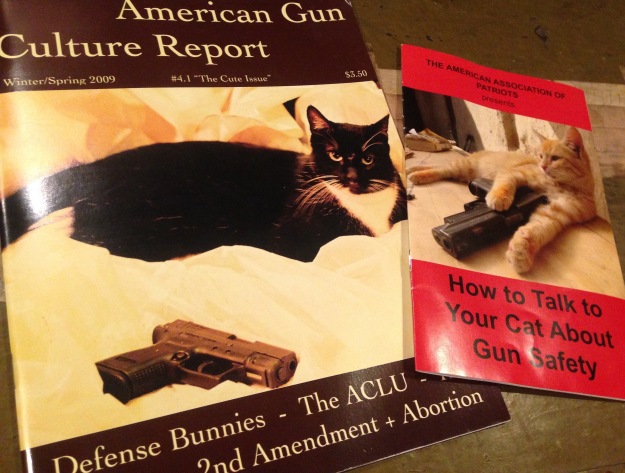 As someone who began writing about gun politics in the ‘zine community over ten years ago, I was always curious if anyone else might eventually take a similar path. Despite the great quantity of political topics covered by ‘zinesters, it was rare to find more than a passing mention of firearms in any context, pro or con. Then almost three years ago, I came across a thin, glossy pamphlet titled How to Talk to Your Cat About Gun Safety. The cover was reminiscent of AGCR #4 (The Cute Issue) from 2009, and I bought it immediately.

An outtake from the cover shoot session, with Other Cat (RIP 1/5/16)
and a Springfield X D subcompact 9mm

This proved to be a delightful satiric work, published by the “American Association of Patriots” and packed with pun-laced advice for armed cat owners. Beside helpful tips on safety, it also provided insight into the types of enemies felines might confront, from houseold intruders, to United Nations personnel and troublesome ghosts.

I soon passed it on to another person who appreciated both firearms and felines, but recently a friend gave me a new copy. My attention regained, I decided to discover more about the enigmatic AAP. After much work convincing them my weblog has no connection with the Communist Party or ZOG (Zionist Occupation Government), a representative finally agreed to answer some questions:

What’s your publishing background? Was Cat Safety a first? Do you have other plans ?

The How to Talk to Your Cat… guides are currently a collaboration between myself and my grandfather Josiah, the founder of the American Association of Patriots. How to Talk to your Cat About Gun Safety was the first one I worked on with him, but he has been writing and publishing since his first brochure in 1974, Protecting Your Cats From the Viet-Cong Menace.

There are three publications currently in print: How to Talk to Your Cat about Gun Safety, Evolution, and Abstinence. We are also excited to announce that this fall, the patriots at Random House, the same company that publishes Bill O’Reilly’s books, will be publishing a full-length compilation of How to Talk to Your Cat… guides, including never before seen topics like Satanism and Post-Apocalyptic Survival.

Do the cats pictured belong to AAP members?

The two cats pictured in How to Talk to Your Cat Evolution are our own, and the one on the cover of Abstinence belongs to a close friend, who happily to let us borrow their feline for promoting such a noble cause. The other cats are all from the internet.

What is the AAP political stance regarding firearms?

The debate over the right to bear arms is not just a philosophical argument – in this era of constant government overreach by Barack Hussein Nobama, a well-armed citizenry is essential to keeping our government from sliding further into tyranny. Today it might be the freedom to own guns, but tomorrow it could be something far worse, like the freedom to own cats! George Washington understood this, Abraham Lincoln understood it, and Ronald Reagan understood it. America is the greatest country in the world, and it is essential that citizens be allowed to own guns without regulation in order to protect themselves from the government.

Thanks for your time. Good luck with those other projects!

Let me get right to the point. I never thought this day would come, but last month I joined the NRA. It’s something I’ve proudly refused to do for years, so my reversal deserves an explanation. Let’s take a deep breath together, this is hard for me too.

You see, opposing the NRA has been my most effective tool in a over decade of pro-2nd Amendment activism, from publishing my old ‘zine American Gun Culture Report, to conducting firearm training among communities not comfortable with mainstream US gun politics. I remember one incident in particular, while tabling for AGCR at an anti-war rally. A middle-aged woman approached, and after scanning my materials, scowled, asking:
“Is this something to do with the NRA?”
I replied: “Absolutely not!”
At this, the woman grinned and proved very receptive, engaging in friendly conversation, despite our differences.

I can’t even count the number of times disowning association with the NRA created an immediate icebreaker, paving ways for calm discussion among groups traditionally considered hostile to pro-gun politics. Why would I want to join a group that, by it’s association with regressive right-wing politics, has sorely tainted the basic human right of self defense? 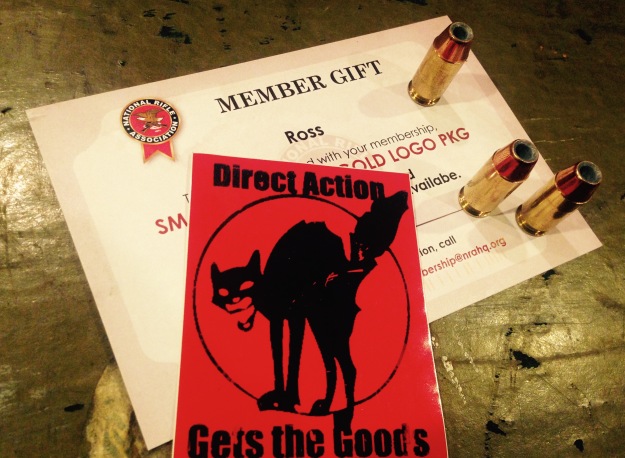 It really wasn’t their free duffle bag with membership.

The thing is, I’d like to provide a more comprehensive critique of the NRA, especially as dialogue over American gun politics heats up during this election cycle. It’s a lot easier to do if they’re sending a regular magazine to my house. However, I wanted to make sure the NRA understood I wasn’t a typical subscriber, so I wrote OBAMA VOTER on my check in block letters.

If it makes anyone feel better, the same day I renewed both my ACLU and Amnesty International memberships, besides signing up for e-mail updates from the Violence Policy Center and Brady Campaign to Prevent Gun Violence. As things get interesting, I want to have all perspectives available.