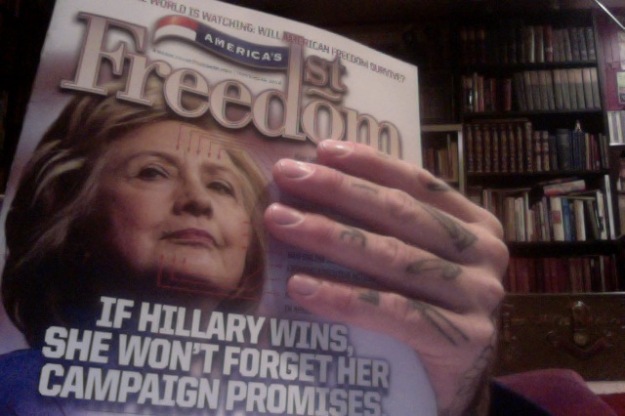 Actually, quadruple is an understatement, as the most recent issue of America’s 1st Freedom contains six individual articles promoting Donald Trump, one cover mention, another showcasing his VP, plus a bonus endorsement insert and special letter by Wayne LaPierre. It looks like a shotgun marriage, but with the blushing NRA handcuffed to it’s bombastic groom with shackles of lurid prose.

Reading each piece felt like a recitation of the grim vows to this unbalanced, manichean ceremony. Despite painting candidates in tropes of Good vs. Evil, in all reality, the articles contain very little about Trump, other than his supposed role as an antidote to their real foil, Hillary Clinton. While Clinton has left an anti-gun trail decades long that any Google equipped researcher can easily follow, none of their pro-2nd Amendment sentiments attributed to Trump predate his presidential campaign.

It’s easy to see single-issue logic operating. One candidate who eagerly embraces armed voters, even though a relatively recent convert. Opposed, stands a politician proud to call the NRA her enemy. An endorsement choice looks obvious. Check the ammo box for Trump. Cycle the action closed.

This simpleminded endorsement is a complete insult. Everyone turning the pages of America’s 1st Freedom knows by now what singular destruction Trump has wrecked throughout the Republican Party. I looked in vain for any mention of his controversies at all. Even to assure NRA members that, despite what they have heard about Trump, he can still be counted on support 2nd Amendment rights, and why that should outweigh everything else, even bragging about sexual assault. At least acknowledge what a fraught decision voting for Trump will be among many members. It’s as though the article deadlines were ten months ago.

By ignoring the true spectrum of reality in this presidential campaign, the NRA is locking American gun politics into potential disaster. Through sheer incompetence and a vile personality cult, the Trump campaign has tainted everything associated with it. Countless Republican defectors, desperately trying to save the reputation of their brand, recognized that long ago. Riding it down Dr. Strangelove style into oblivion, which looks increasingly certain (barring some new sensational Clinton revelation), will only cement the 2nd Amendment alongside misogyny and comb-overs in American political consciousness. It’s still not too late for a divorce.

Dear Wayne LaPierre and all at the National Rifle Association,

As a socialist, I may not fit the stereotypical gun owner stereotype, yet you might be surprised how many armed Americans reject right-wing politics. In fact, long before the NRA entered its modern incarnation, it was leftists who proudly defended the 2nd Amendment as applicable to all citizens, no matter their race, identity or gender.

While representing a minority within the NRA, I am still among many members appalled by your endorsement of Donald Trump for president. The man is an obvious opportunist, with no clear lifelong commitments other than his own personal gain. An individual who has repeatedly demonstrated sheer incompetence for public office, degraded nearly every vulnerable section of American society, and, as recently revealed, even bragged about using his fame as a tool for committing sexual assault.

Best case scenario, Trump wins and remembers NRA voters fondly, at least until his stance on gun control changes again. The worst? Surely something along the lines of current developments. A campaign flailing wildly against scandals smearing it bow to stern. Personal behavior so shamefully conducted that a politician as widely reviled as Hillary Clinton can leap ahead in the polls and appear ethical by comparison.

I demand the NRA retract its endorsement of Donald Trump and issue a strongly worded condemnation against his racism and misogyny.

That endorsement has potential to forever taint the NRA and everyone else who advocates for the basic right of self defense. I am not suggesting an endorsement of Clinton, who I absolutely distain for many reasons, yet maintaining the course in this situation is unacceptable. Missing the opportunity to distance gun politics from such a repugnant figure as Trump would be a huge mistake. This is a simple human decency issue. Thank you for your time.