First of all, I’d like to admit that I was wrong. Terribly wrong. As recently as five months ago, during casual political discussions, I spoke breezily about the unexpected longevity of Donald Trump’s candidacy and what a fascinating window it shone onto disaffected elements within the Republican Party. My observation always concluded, “But he can never be president.”

While Trump remains far from actually winning the presidency, I was still wrong. Of course, what I meant, was that an establishment candidate must inevitably triumph, with vast superpac resources and party backing. Rank and file Republican voters might briefly flirt with entertaining, yet absurd personalities like Ben Carson or Trump, but someone on the order of a Jeb Bush would necessarily become nominated. That’s how the game works. Or worked.

For now, we can skip over the litany of inconsistencies, incredible claims and bizarre statements by Trump that would have shattered any other serious campaign and have already turned most party power brokers against him. By this point, his opponents are well aware of them and most supporters simply don’t care. However, for a weblog about firearms and social violence, the calls to action uttered by Trump himself require serious scrutiny.

Irresponsible rhetoric is nothing new to American presidential politics, from caustic personal insults during the 1800 Thomas Jefferson .v John Adams campaign, to John McCain’s joke about bombing Iran in 2007. Trump possesses no reservations against using similar language regarding political opponents, but ups the ante by encouraging rally attendees to physically attack protesters, even claiming he will pay their legal bills if arrested. Crowds are listening.

Besides a reluctance to distance himself from the endorsement of KKK leader David Duke, Trump’s gatherings have become noted for assaults, not to mention hand-raising “loyalty oaths,” which many perform in a classic Heil Hitler salute. In one amazing incident, Trump campaign officials didn’t even bother relegating one of their neo-Nazi volunteers to stuffing envelopes in a back room, but let her be interviewed on television, with fascist tattoos prominently displayed. For an election cycle already over the top, it’s beyond parody.

Now, many people observing these incidents immediately take a predictable worse case scenario and compare the situation with 1933 and Hitler’s rise in Germany. I am hesitant at making such a leap, but still, the potential for civil disorder appears to be growing. No matter who becomes nominated by either party, 2016 will surely be a very bitter election. Trump has already threatened supporters will riot if his bid is thwarted at the Republican convention.

Assuming, it is indeed Trump on the Republican side, what might his adherents do if he looses the general election? Will people who consider this man their saving grace from alleged hordes of Mexican rapists, simply concede defeat, after being urged to take matters into their own hands? Or, conversely, should he win, take that victory as license to exercise violence against Trump’s declared foes among minorities?

I hate to think of what might be possible under these conditions, which is the reason I became a gun owner in the first place. Historically, whenever skeptics asked why I keep an AK-47 handy, my response, as a historian, was generally: lynch mobs. While some comfortably imagine such terrible outbursts only occurred long ago in America’s past, per just one example, it was 2007 when a racist crowd attempted murdering two Latino men, just several miles south of my home in Portland, Oregon.

Though Trump has clearly mastered redirecting class resentment along ethnic and religious lines, his supporters shows signs of being uncontainable. The 2016 presidential race is already leagues off any map into uncharted territory. If frustrated or euphoric right wing voters use violence against vulnerable members of society, it may very well fall on common people to make hard choices. Turn away in shock, or respond with prompt action.

Far too often in US history, individuals have taken the easy path and let mobs carry out extremist justice, from Gold Rush era purges against American Indian to the Zoot Suit riots against Latinos and Blacks of 1943. Should Trump’s slogan “Make America Great Again” signal a return to the days of unaccountable pogroms, armed citizens must be ready to counter them. If dark days lie ahead, at least we can choose not to enter them helplessly.

I was driving my truck home from work last week, listening to National Public Radio, and a story came on about the recent Kansas shooting. It’s absolutely tragic and coming in the wake of the its alleged perpetrator being served a protection order over domestic violence, says a lot about American male entitlement, but something else stuck out at me. Aside from even moderately socially conscious broadcasters like NPR often having a hard time breaking through issues regarding patriarchy, it’s also difficult for them to talk comprehensively about guns. 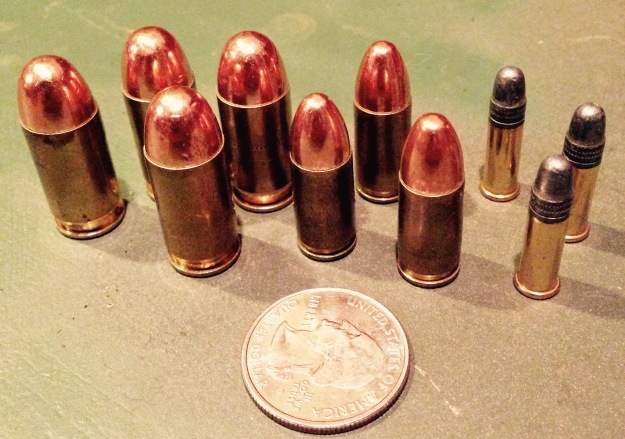 A commentator in this case referred to the individual, who murdered three others, being armed with a rifle and “High Caliber handgun.” That sounded rather sensational, so upon getting home, I fired up the internet and checked. Apparently this pistol in question was a .40 Glock. In other words, an entirely average caliber, known for being especially popular among police departments. Here’s the thing. Calling something high caliber is a relative term. Caliber refers only to bullet diameter and can easily mislead. For instance, a .22 cartridge is typically used only for target shooting or small game, yet many military rifles are chambered in the comparatively robust .223. Though only imperceptibly wider, the latter cartridge is longer, containing a bigger powder charge. Or look at .38 Special and .357 Magnum. Same diameter, but a .357 is significantly more powerful. Yet, none of these could be reasonably called high caliber.

To elaborate, in the US, .40 is an extremely common caliber, as are .45, 9mm, and .38 Special. Anything much smaller would be unusual among handguns designed for self defense. An example: I stand 5’9” high. That makes me fairly average among American men, but when I travel in central or northern Europe, most everyone towers over me. The situation becomes reversed when spending time in Latin America. Therefore, when I am carrying my 9mm in the US, I am an average sized individual with an average sized gun. In Nicaragua, however, people just as correctly call me tall. Context remains everything.

Another term the media likes to throw around is “High Powered.” To accurately call a gun high powered, it should be something more than typical, like the famed .50 Desert Eagle pistol, or Barrett long range .416 rifle. Still misleading. I feel like my .50 black powder rifle is pretty high powered, yet it requires a long time to load and never tops the lists of dangerous firearms that should be banned. There’s no international standard with any of this. Just another term useful for raising people’s blood pressure instead of facilitating comprehension.

A six-shooter .38 Special S&W revolver. At one time, High Capacity

Then take “High Capacity.” The gun used in Kansas likely used a standard fifteen round magazine. Over the last thirty-plus years, that number has become increasingly common, to the point where one might call a classic 1911 style .45 pistol with its seven round magazine, Low Capacity. Back in the late 19th century, a rifle like my K98 Mauser’s five bolt-action shots was considered high capacity, but after a few decades, it became overshadowed by newcomers like the AK-47’s thirty rounds magazine. Terminology must adjust with technology over time or looses all meaning.

There’s not necessarily anything wrong with words like high caliber, high power or high capacity. The problem lies in how such terms are manipulated, out of ignorance and to inspire fear. Just as the right wing media twists inaccurate information about various issues, keeping listeners frightened into supporting the status quo, supposedly more responsible news outlets do the same thing in furtherance of their own agendas. It’s important to stay aware. The way words are used can set minds free, or just as easily hobble them.