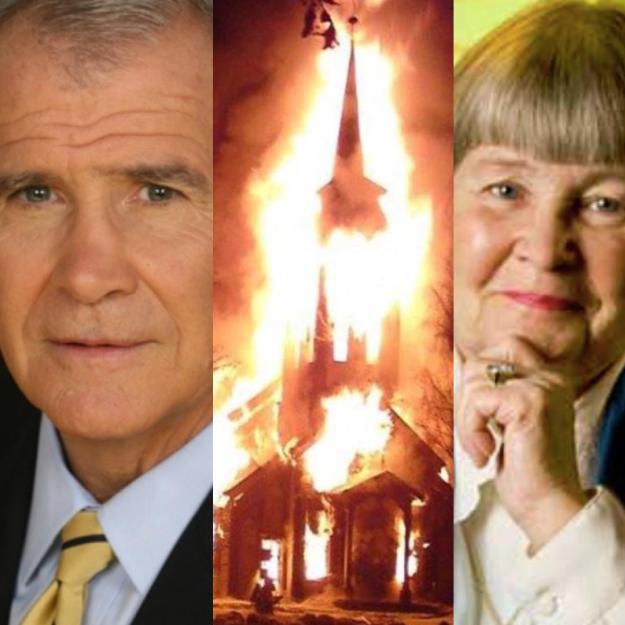 Together their surnames sound like a Black Metal band on trial for church arson, but Oliver North and Marion Hammer recently managed in just one day to throw additional fuel on everything that makes the National Rifle Association such a trash fire.

On May 7th, the NRA announced their next president, an iconic position historically often given to retired military officers or more recently, Right Wing public personas. Lt. Col. North fills both requirements. While he came across sympathetically to many during the 1980s as a stoic scapegoat from the Iran-Contra scandal, his career more recently involved playing a Fox News contributor in the most typical scribble-by-numbers sense. Wide eyed disbelief at how Democrats allegedly hate police officers, sorrowful head shaking when activists shout anti-war slogans and incongruous outrage at  NFL players peacefully kneeling during the national anthem as protest against State Terror by police forces.

Instead of winning more people over in support of gun rights, choosing North signals that the NRA seeks no deviation from it’s tragic policy of marrying the 2nd Amendment to regressive political and unrelated social issues. While the human right of self defense should hold universal appeal, it has instead promoted characters like Executive Vice-president Wayne LaPierre, who wrote sarcastically against feminism, singled out Ben and Jerry’s ice cream for attack* and repeatedly blamed shootings on video games. Of course, anecdotal evidence strongly suggests video games make teenagers extremely boring, yet no scientific link has ever been found to demonstrate that digital violence ever leaves the domain of ones and zeroes.

Still, LaPierre’s bungles pale in comparison to NRA board member Ted Nugent who most infamously created a new definition for White privilege when he evaded legal jeopardy after threatening to machine-gun President Obama, besides calling him a “subhuman mongrel” and then issuing a half-apology no parent would accept from their six-year old. Nugent’s other antics include referring to Hillary Clinton as a “bitch,” whore” and “toxic cunt” besides a whole host of slurs against Black and queer folks among many others. His dimwitted social observations are hardly original among the most ignorant, but by elevating such a man so highly, the NRA irresponsibly gives clear endorsement to such views. One could hardly imagine a better way to alienate decent minded people from the gun rights movement than a 60 second google search of Nugent’s quotes.

Then, if this wasn’t all bad enough, just hours after Oliver North’s new job announcement hit the airwaves, former NRA president Marion Hammer appeared on the NPR program All Things Considered. Immediately she fired off a classic culture wars bazooka. In her social analysis, the root cause of gun violence is “the breakdown of families. Parents don’t raise children the way they used to. There are too many children who grow up on their own without guidance.”

Hammer didn’t specify further, but it’s clear where she was riding the family values train and is an easy argument to dismiss. For example, divorce rates in the European Union as a whole are roughly identical to the United States, just under 50%. However, the EU is much more friendly territory for gay marriage and adoption, gender equality, including trans rights, not to mention atheism, abortions, birth control access…etc…etc…in other words, the vast host of issues that conservatives blame on destroying traditional virtues. Yet despite these trends not increasing divorce rates, they also don’t lead to Europeans murdering one another with the same enthusiasm as Americans. It’s obviously something else.

Unfortunately, North, LaPierre, Nugent and Hammer are ideological  prisoners, clawing at any excuse to blame shootings on something besides guns, yet ignoring what actually makes the United States so dangerous. Institutional racism is a huge factor, yet kneeling at football games never hurt anybody. Video games don’t kill, but toxic forms of masculinity remain dominant themes among mass murderers. Healthy families are obviously important, but children raised by queer parents are no worse than others. Systemic poverty destroys whole communities, leading to tragic violence levels, yet the NRA would rather play off skewed Right Wing social biases than face the truth. It weakens their organization long term and sadly, hampers the work of everyone who cares about the right to be armed.

1 thought on “NORTH & HAMMER: More Reasons to Burn the NRA”