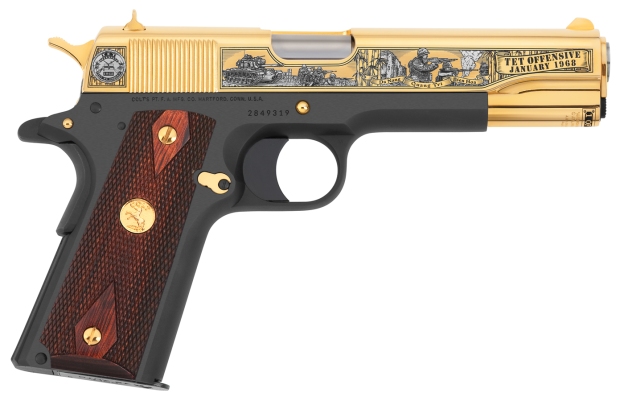 If a perfect metaphor to symbolize the current state of American politics is sought, look no further than the world of commemorative firearms. You can find ads for these in many leisure periodicals, usually featuring triumphant patriotic themes or personalities like John Wayne and General George S. Patton, emblazoned with gold filagree.

This is a time when the president-elect of the United States not only coddles White Nationalists and openly admires Russian strongman Vladimir Putin, but has already broken longstanding protocols keeping peace with China and implied willingness to break international treaties controlling nuclear weapons. A candidate who ran as an outsider to “drain the swamp” of status quo politics, now stacking cabinet positions and government departments with insider apparatchiks.

Therefore, how appropriate under such circumstances that the first issue of the NRA’s political magazine, America’s 1st Freedom since Donald Trump’s election, contains a full-page ad for a Colt .45 pistol commemorating the 50th anniversary of the Tet Offensive.

The Tet Offensive. A series of intense battles in 1968 that is widely considered to signal when the United States began loosing the Vietnam War.

2 thoughts on “The Tet Offensive and Trump”