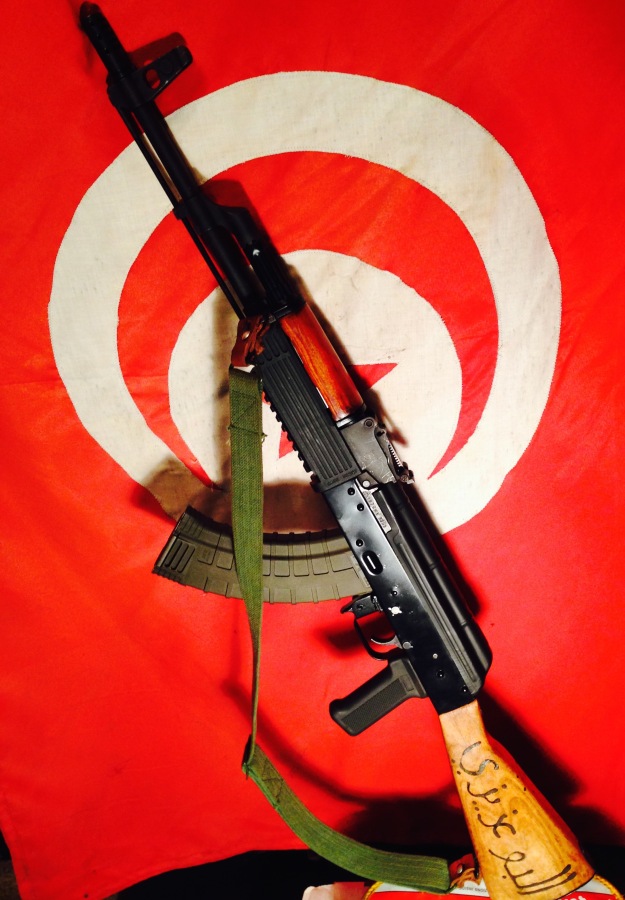 Several years ago, my friend Ann encouraged me to order an AK-47 parts kit. She had been building them in her garage for some time, in fact, I’d written an article about the process for my old gun politics ‘zine AGCR. Soon enough it showed up. A decommissioned Romanian rifle with the stamped receiver cut in sections. It reeked of cosmoline. A capital letter G stood out boldly, engraved on the rear sight block.

For me, that was a bonus. It stood for Garda, a special section of the Romanian military created as a citizens militia. Nicolae Ceauşescu, the longtime dictator, originally founded it in response to Soviet Russian crackdowns on freedom movements throughout Eastern Bloc countries during the late ‘60s. This put Romania in an uncomfortable position, wholeheartedly accepted by neither side during the late Cold War. The Garda persisted, conscripted mostly among young people and issued AK-47 rifles, ostensibly providing a loyal armed force to maintain civil order in times of crisis.

Over time, Romania became an increasingly bitter country, wracked with economic troubles and autocratic rule. Then in 1989, as other Communist states folded through relatively peaceful transfers of power, Ceausescu’s regime hung on. The Garda proved reluctant to fire against their own neighbors and significant numbers turned on the government. Weapons intended for entrenching a totalitarian ruling class instead took part in tearing it down. Little wonder I thrilled at holding such a piece of history.

Ann and I pressed out its barrel, then removed the stock and other components, before fabricating a replacement receiver from sheet metal. We installed a new trigger group, pistol style grip and muzzle compensator. After much grinding and welding, it functioned reliably at last. The old Romanian AK had turned into a US legal semi-auto firearm. Around then, Ann informed me that every home built rifle needs a name.

I pondered this. It was early autumn of 2011, and while commercial fishing in the Gulf of Alaska over the summer, repercussions after the Arab Spring democratic uprisings played out over our deck speakers via satellite radio. One by one, repressive governments collapsed, from Libya to Egypt, shaken by a mix of mass demonstrations and in other cases, armed resistance. Just as enormous halibut succumbed under our sharp knives, dictators like Gaddafi and Mubarak fell from power.

Of particular interest was Tunisia, where the unrest began. My shipmate Anissa, came from a Tunisian family, and together we learned how it started, after a street vendor named Mohamed Bouazizi, set himself on fire to protest unjust treatment by government agents. Just two weeks following his sacrifice, Ben Ali, the national leader for over two decades, was forced into exile.

Inspired by these events, movements against authority spread, eventually to the US just as fishing season ended. Like others in my fleet, I proudly joined the domestic occupation movement, personally waving a Tunisian flag in solidarity with their cause. The choice seemed obvious. I named my immigrant AK-47 Bouazizi. 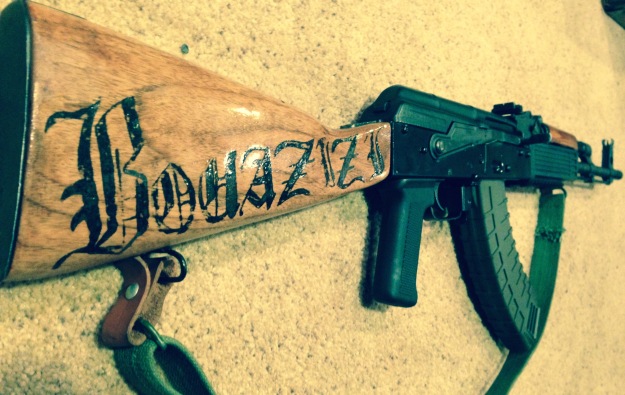 Recently, I took the final steps toward dedicating it. After years with the name simply painted on a standard wooden stock, I carved a custom one from oak. The traditional ones are quite short, designed for soldiers wearing cold weather gear, so I cut this one almost two inches longer, making it more comfortable to shoulder. On one side, I engraved the name in Arabic letters, and on the other, using Old German script. Then across the top, I added Tunisia’s crescent and star. With metal shavings and glue, I inlaid the patterns, then sanded everything flush once it dried, creating a nice faded effect. A couple layers of stain and lacquer later, I screwed it solidly in place. Complete at last. 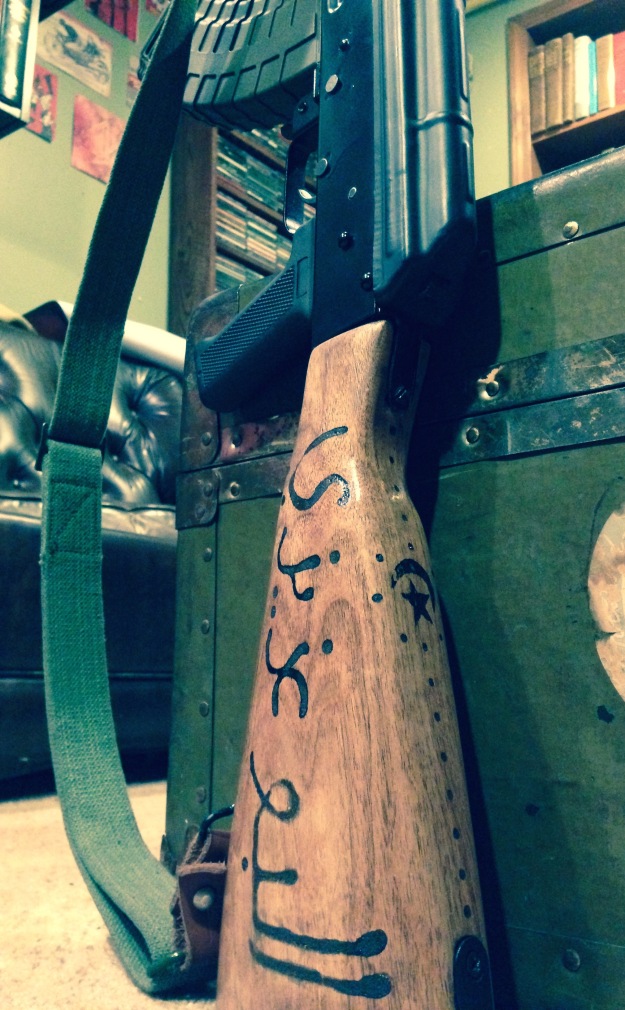 My rifle memorializes historic stands against tyranny and injustice across continents, cultures– and the power of common people to throw off oppressors. It will be many years before the true course of Romanian and Tunisian destinies play out, but brave people who took incredible chances to forge it for themselves should never be forgotten. I am honored to commemorate one of them. Mohamed Bouazizi didn’t die in vain.